“Aficionado: A person who is very knowledgeable and enthusiastic about an activity, subject, or pastime.”

My Uncle Bill wanted me to become a gentleman salesman; he was disappointed when I became a Teacher in Chicago.  Yet in a way, I was that salesman in the classroom, selling English grammar, composition, and literature.  That satisfied him somewhat.

He smoked: Pall Mall cigarettes and White Owl cigars.  He was determined to teach me the ways of a “gentleman” ((he was an executive for US Steel): cigars and scotch.  I was smoking Camel cigarettes. [https://memoriesofatime.blog/2013/08/05/pack-of-camels-please/]

So on occasion, usually after a family gathering, he would offer me a good cigar (perhaps a Garcia Vega), and a glass of scotch. I’m not sure now whether single malt, or the age.  It was scotch. 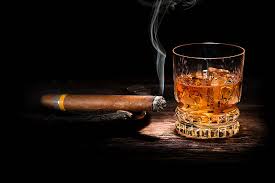 Then we moved away, and I moved away from cigars and scotch until later in my life.  I smoked until 1972; I was 31.  I had been smoking for 12 years, then suffered from severe bronchitis.  “You should stop smoking,” I heard the examining doctor say.  “That’s not very forceful,” I countered.  “Stop smoking!”  I did, then, at that point.  (“Cold turkey,” whatever that means.)  I got better, and was better at scotch (and vodka).  Too much.  Until six years ago.  (“Cold turkey…”)

Cigars?  My two sons have become my Uncle Bill: introducing me to A. J. Fernandez, Rocky Patel, Ramon Bueso, and other tobacco-leaf friends of theirs.  I have my humidor, cigar samples, lighters, catalogs, and conversations with them as I learn and enjoy.

I smoke outside, behind our cozy 860 square-foot condo.  My lawn chair faces the two-lane busy street, busy with cars, beer trucks for the tavern across the street, public transportation buses (I can see the bus stop not far from my resting place), and trucks laden with wares of all kinds for the large grocery store, its parking lot always filled.  Even not far away is a fire department house, with two engines.  Sirens and lights.  Excitement.  And ambulances for the hospital a few miles away.  Ah, retirement.

Using Mayo Clinic’s Guidelines for Tobacco Use (“How many cigars can I smoke a week?”  “NONE!”), I limit myself to no more than two a week.

Enjoyment and relaxation.  So much better than a cigarette.  Oh, I used to light up a cig after a meal; that was really good.  Or have a smoke while sitting on a bench relaxing; that was good, too.  Cigarettes, however, are pressure pleasures.  (“Gotta have a smoke!”  “Gotta extra smoke?”)  (“How much?” “A pack a day.”)  Cigars are relaxing pleasures.

One or two puffs, maybe three, a minute, rolling the cigar between the thumb and fingers, not coughing, not inhaling.  Just relaxing.  Puff.  Smoke.  Make as much smoke, look at, watch, the smoke.

I sit under the trees, the clouds.  I see the Chinese Restaurant Take Out customers across the street.  Then the setting-sun light, the parking lot lights switch on full blare.  Maybe it’s quiet.  In the quiet I’m lost–and soon the cigar, I realize, has burned down to the label, or I am so relaxed, or it has become dark.

Time to go inside.  Time passed so quickly, either alone or in conversation with others.  But that cigar. . .

A cigar is as good as memories that you have when you smoked it. —Raul Julia

One of the joys of cigar smoking is it allows us to delve into interesting thoughts and observations.

[It is said that Freud smoked 20 cigars a day…] 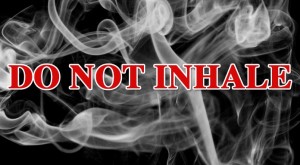