On a recent trip to Minnesota, I rode the tram in the Minneapolis airport.  Carry-on bag with me, I stepped onto the tramcar, moved away from the doors which were about to close (as I was warned), and sat down to the right in a senior seat.  I had a perfect front view of the tracks, and a view of how I was going to travel to Concourse C.

In a moment-flash-to-the-past, a recurring moment, I was transported to Chicago, the Chicago L, the Englewood Line, then called The “A” Train.

CTA “A” TRAIN TO HOWARD STREET

Our route was the walk from 67th and Marshfield, to the bus on Ashland, then north to 63rd, transfer to 63rd to Loomis, where the Englewood Line ended/began. 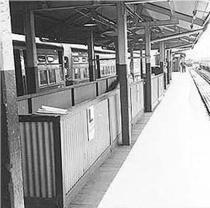 Through the station and up the stairs we went.  (See the 1995 romantic comedy film While You Were Sleeping with Sandra Bullock and Bill Pullman for a view of fare-collecting and L train stations.)  Almost running to the front of the waiting “train,” the two of us pushed into the first car, sitting in the front across from the motorman.  We’d share turns on the single seat by the front window.

As the train went underground, becoming the subway under the Chicago Loop and farther north, the journey under the city thrilled us both–and a greater thrill when the motorman opened his door, propping it open with a foot or leg, allowing us front-row seats to the controls of the machine.  We drove with him.  We were in command.

Lights and rails and signals raced by; then we slowed for each underground platform stop.  As we came to daylight, we saw and felt the climb up the rails to over two stories above the city.  We were always able to look down at porches and cars and people, or look into third-story windows.

From 63rd and Loomis to the end of the line at Howard Street, we delighted.  Then everyone off, down the stairs to the exit to the street.  We would walk around, finding our favorite stop for a Coke, then looking in the showroom window of the Mercedes-Benz dealer on Howard and State Street.  In the showroom, we walked around, transfixed–really–looking at the new gull-wing Mercedes-Benz,

Then we’d make our way back home, looking forward to the ride, but somewhat let down, of course, for the trip was over.  But at the same time, what a trip, nearly from one of the city to the other.

As we grew older, the trips became less frequent.  Yet like Holden Caulfield protecting his sister Phoebe (in Salinger’s The Catcher in the Rye), I was my brother’s savior on one unforgettable L ride.

We were traveling underground.  I was in the single seat (my turn…), facing the motorman compartment, but able to turn face-front.  My brother was in the first double seat, next to the window, looking forward and left.  Both of us thought nothing of the old man who came from a crowded platform and made his way to sit down with us in the empty place.  Next to my brother.  Small talk (as I look back), about our ride and us.

From the corner of my eye, I saw the man move his hand slowly from on his left leg towards my brother’s little right leg covered by brown corduroys.  I mean, this guy was some kind of pervert and all…  Honest to God!  And I got excited and all.  And nervous.  I mean, what was I supposed to do?  I’m not kidding.  I kept worrying, in slow motion and all, about what the pervert was going to do–and all.

I looked him in the eye: “Don’t touch my brother or I’ll kill you, I swear to God I will!”  He stood up and moved.  There I was, sliding away from the window, sitting down next to the little guy.  There I was, the catcher in the rye and all.  I caught him before he was swept over the cliff.  I saved him and all.  I swore then and there that I would NEVER let harm come to him–and all.

From Wikipedia: The Chicago rapid-transit system is officially nicknamed the ‘L’.  This name for the CTA rail system applies to the whole system: its elevated, subway, at-grade, and open-cut segments.  The use of the nickname dates from the earliest days of the elevated railroads.  Newspapers of the late 1880s referred to proposed elevated railroads in Chicago as ‘”L” roads.  The first route to be constructed, the Chicago and South Side Rapid Transit Railroad gained the nickname “Alley Elevated,” or “Alley L” during its planning and construction, a term that was widely used by 1893, less than a year after the line opened.

In discussing various stylings of “Loop” and “L” in Destination Loop: The Story of Rapid Transit Railroading in and around Chicago (1982), author Brian J. Cudahy quotes a passage from The Neon Wilderness (1949) by Chicago author Nelson Algren: “beneath the curved steel of the El, beneath the endless ties.”  Cudahy then comments, “Note that in the quotation above … it says ‘El’ to mean ‘elevated rapid transit railroad.’  We trust that this usage can be ascribed to a publisher’s editor in New York or some other east coast city; in Chicago, the same expression is routinely rendered ‘L.'” The Chicago Tribune style guide also uses ‘L.’

As used by CTA, the name is rendered as the capital letter ‘L’, in quotation marks.  “L” (with double quotation marks) was often used by CTA predecessors such as the Chicago Rapid Transit Company; however, the CTA uses single quotation marks (‘) on some printed materials and signs rather than double.  In Chicago, the term subway is only applied to the sections of the ‘L’ network that are actually underground and is not applied to the entire system as a whole, as in New York City where both the elevated and underground portions are called the subway.